Chess classes
News
Candidates 2020 (1): The defeated invincibles
Wang Hao and Ian Nepomniachtchi won good matches with Black against Ding Liren and Anish Giri, who had gone 14 rounds without being beaten in their previous Candidate Tournaments, and got off to a bad start in Yekaterinburg. There were strained struggles everywhere, with MVL and Fabiano Caruana engaging in what Peter Svidler called "a theoretically important match," while observer Magnus Carlsen called (as our experts in the candidates' previous) a "bad time manager" as he finally let Kirill Alekseenko escape in time problems. 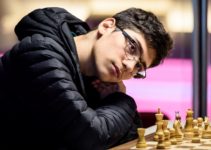