Chess classes
News
Magnus Carlsen wins Divis Cup
A new event was played today, the Divis Cup! What is it? In bringing all participants together in the same broadcast and playing a closed tournament in the chess24 play area. We had the luxury of having the world champion, Magnus Carlsen, fighting some of the best Spanish-speaking players with three 2700s: Leinier Dominguez, Paco Vallejo and David Antón. 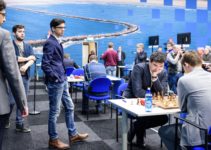