Chess classes
News
Svidler and Duda also to semi-finals
"If this match teaches us anything it's that you shouldn't play the Grunfeld," said the world's all-time Grunfeld expert Peter Svidler after losing game 12 in 24 moves.

That made a draw between 6 and 6 and a sudden death, but Peter won the next game against Vidit to advance to a semi-final at the Pepe Cuenca and Divis Invitational against David Antón.

Jan-Krzysztof Duda will play Vladislav Artemiev in the other semi-final after a spectacular final in Game 4, which was the start of a five-game winning streak that blew up Harikrishna 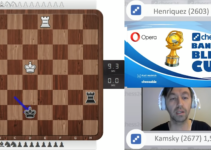